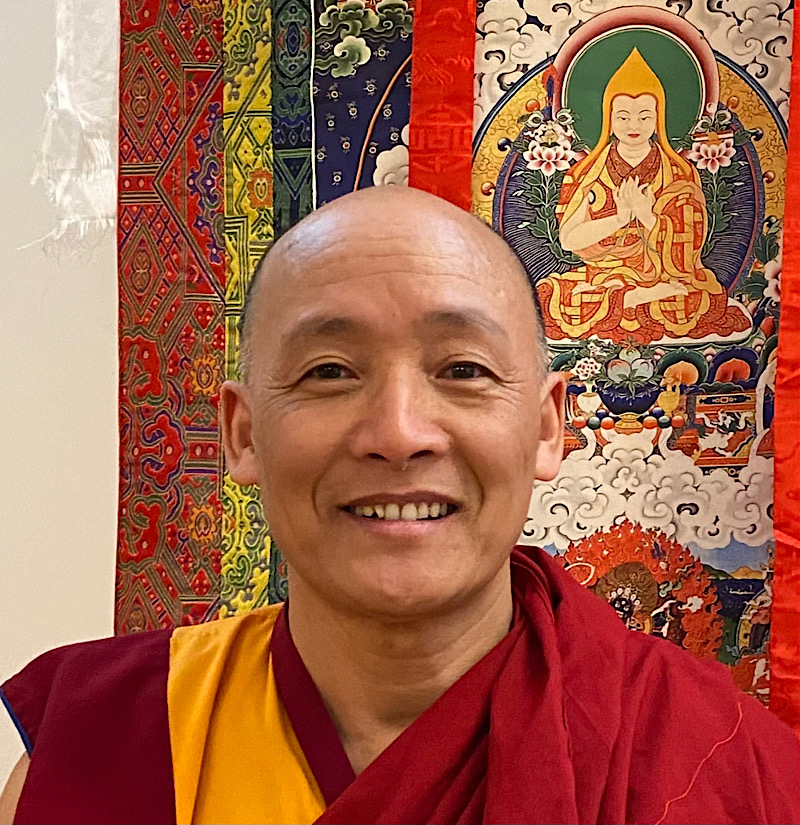 Some of the Masters of the Madrid Center are Trustees and some are also Directors of the Foundation. They lead the activities of our center: teachings, practices and meditations, social and development aid projects, etc.   In addition to the local activities, they travel to the center of Geyje Norling in India, which is also an officially recognized charity, to help in its management and in development aid projects.

Geshe Lobsang Tendar was born in the Indo-Tibetan region of Tawang in northeast India in 1973.

As a Doctor of Buddhist Philosophy he has a very deep knowledge of the Dharma teachings, as well as the practices and meditations.

He is Geshe Lharampa * – the highest level in Tibetan monastic studies – and like Lama Jampa and many other great lamas, he studied at Gaden Jangtse Monastery (India).  He has also studies in Buddhist tantra at Gyume Tantric Monastery, obtaining the title of Geshe Ngakrampa**.

He is an expert in the teaching of classical Buddhist texts and in debate.  Geshe Lobsang Tendar is a Master resident in the center of Madrid.  He imparts an important part of the teachings and is in charge of carrying out many of the practices and meditations of the center.

* Geshe Lharampa title.  The Tibetan word Geshe (“ge” means virtue and “she” friend who helps to know) has as meaning: spiritual friend or friend who knows virtue or who knows what should be practiced and what should be put aside.  It is obtained in the universities and institutes of Tibetan Buddhism that  continue the great intellectual tradition of the ancient Indian Buddhist universities of Nalanda and Vikramasila.  The title is achieved after intensive studies, reflection sessions and debate sessions on classical philosophical texts of Buddhism and their commentaries in different aspects: ontology or nature of reality, epistemology or the way in which man knows, psychology or science of the mind, logic, and ethics or moral behavior.  It requires a minimum of 17 years of study, which can be equivalent to a doctorate or PhD, but it also covers other domains such as, for example, monastic discipline.  After these studies the teacher is qualified to help others to make progress in wisdom.  Once the title of Geshe is achieved, the most advanced students take exams and further study for 6 more years until they reach the degree of Geshe Lharampa.

** Geshe Ngakrampa title.  After attaining the title of Geshe Lharampa, the more advanced students spend a full year at Gyume University studying Tantrayana and, after passing the exams, they obtain the title of Ngakrampa Geshe.  Normally afterwards they dedicate themselves to teaching in different centers worldwide.